Festivals, of many types, serve to meet specific needs, as well as to provide entertainment. The times of celebration offer a sense of belonging for religious, social or geographical groups. In the past, festivals were times when the elderly shared stories and provided a chance of unity among families. Modern festivals that focus on cultural or ethnic topics seek to inform members of their traditi 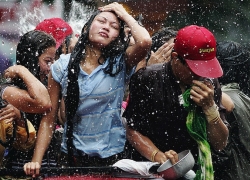 The most common type of Myanmar festivals is pagoda festivals, which are related to Burmese Buddhism, focusing on paying respects to the Buddha through offerings and prayers as well as traditional singing and dancing performances and colorful markets where local goods can be bought. Festivals last about one week. Some local people come by bullock carts, some by boats, and then set up temporary stalls. They sell so many items – household utensils, Myanmar cosmetic, medicinal herbs, and foods. Entertainment halls show movie, drama, and opera. After one festival, they move to another. For this type of festival, you can find in Anada Pagoda Festival in Bagan (December/January) which hosts one of the biggest and longest festivals of the year around the full moon of the lunar month of Pyatho. Other festivals are Mahamuni Pagoda festival in Mandalay (January/February), Golden Hilltop Festival in Thanlyin (January/February), Shwemawdaw Pagoda Festival in Bargo (March/April), Chinlon Festival in Mandalay (June/July), and so on.

Ranking second is nat (spirit) festivals, where believers pay homage to animist spirits and consult spirits medium for advice. The most famous and important nat festival of the year is Taungbyone Nat Festival in Taungbyone near Mandalay in the month of July or August. It brings together nat kadaw (spirit mediums) from all over Myanmar to perform dances and dispense advice from the spirit world to believers. Shrines are erected to the Taungbyone brothers, who in ancient time were unjustly killed by their adoptive father, King Anawrahta, and therefore became powerful spirits who must be appeased by followers with offerings.

With no less important role, Lunar New Year festivals also own their religious significance. The most well-known festival is Thingyan, a four-day celebration of the coming lunar New Year. This festival is held prior to the Myanmar New Year, the first day of Tagy which falls in mid-April. Similar to many other Southest Asian New Year festivals, people splash water on one another. This is expected to observe the Eight Percepts of Buddhism, which are percepts for Buddhist lay men and women who wish to practice Buddhism strictly. These percepts focus both on avoiding morally bad behavior and leading a more ascetic life.