Myanmar cuisine is a harmonious combination of influences from China, Thailand and India - those that border the country. Still, it possesses significant traits that are nowhere else to be found. Also, as Myanmar itself is a country of multi-ethnic diversity, there is available a cuisine diverse from states to states, divisions to divisions. 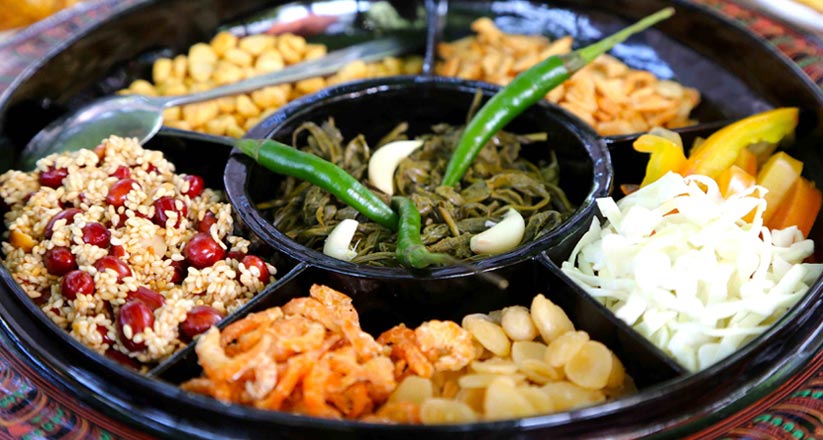 Generally, Myanmar foods are sweeter and milder than Thai or Indian food, spicier and sourer than Chinese foods, but indeed very tasty with their unique flavors. Dishes are made from local agriculture products of vegetable, plant and seafood available, sharing a strong bond with the surrounding nature. Different regional geographic factors lead to different regional culinary features. For example, in landlocked cities like Mandalay, poultry and meat are common ingredients; meanwhile, in coastal areas like Sittwe, Myeik or Dawei, seafood is more commonly used. Like other South East Asian countries, Burmese locals are willing to eat nearly everything that edible, regardless of plants or animals. In addition, according to Burmese medicine, foods are divided into two categories which are cooling (such as pork, eggplant, radish) and heating (like chicken, chili, and durian) based on their impacts on human’s body, similar to the food classification of Chinese.

The main ingredients utilized are rice, fish and tea leaves – all of them are in amazing freshness. First of all, rice is a dispensable part in any Burmese meals. Also, the meals are filled extensively with fish products (like fish sauce or fermented seafood – ngapi in Burmese) as the primary source of protein cooked in a wide variety of ways. Last but not least, Myanmar is among very few countries that not only drink but eat tea, with its unique pickled tea leaves called laphet. All in all, Burma’s traditional favorites are summarized in the expression: “Mango is the best among all fruits; pork is the best among all meat; and laphet is the best among all leaves.” 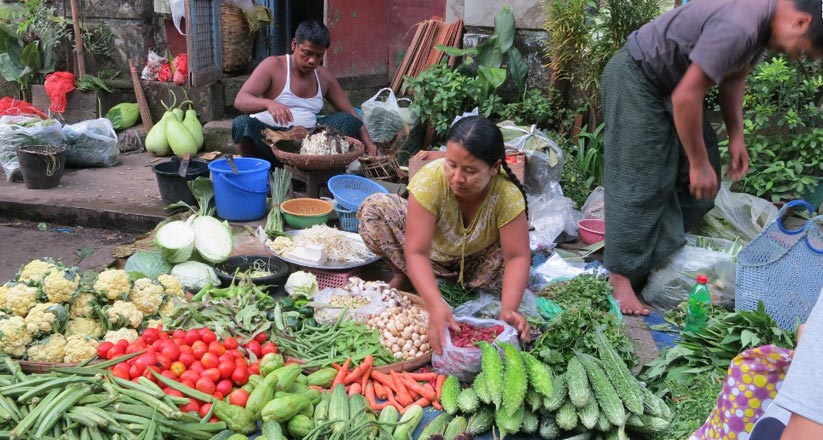 Burmese cuisine is also unique in its cooking techniques – firstly from the preparation which is outstanding and vary depending on regions, religions and ethnicities. In the preparation process, precise timing is of uttermost important. Freshwater fish and shrimp can be eaten fresh, dried or filleted, fermented sour or whole salted. Salads (thokes) are varied, normally made from one main ingredient, ranging from whole grains such as rice, wheat to other vegetables like tomato, ginger or tea leaves. In addition, the Burmese often use a plenty of oil as well as spices and seasonings, creating distinctive flavors. Chinese influences are found in the techniques of stir frying as well as in the use of bean curd and soy sauce. Meanwhile, Indian impacts are shown in the Burmese versions of popular India’s dishes like samosas and curries – especially curries with its frequent appearance. To make curries, the Burmese use less spices, more ginger and garlic in comparison with the Indian. Like its Thai neighbor, the Burmese eat fried insects as a kind of snacks. 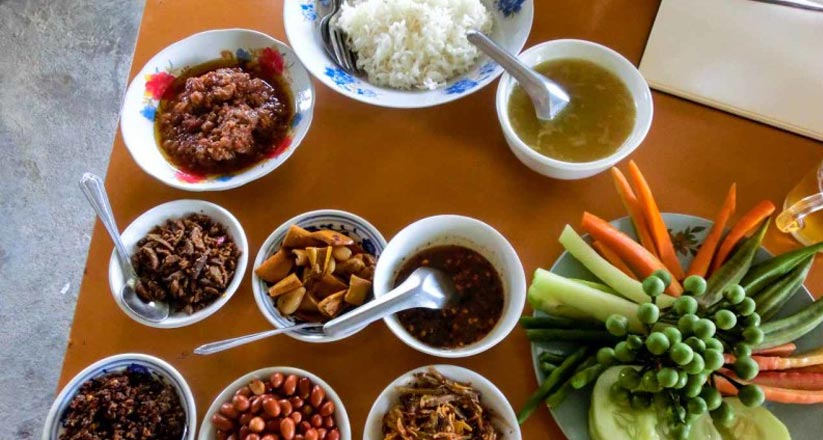 A typical Burmese meal contains steamed rice – the main dish, and other side dishes known as hin, including a bowl of soup, a plate of boiled or fresh vegetables, curried dishes of fish, meat or poultry, and a salty dish of pickled fish sauce. In a meal, serving the eldest diners first is a must. Rice is eaten with one’s right hand in the form of small balls. On the other hand, noodles are eaten with Chinese style spoons and chopsticks, and noodles salads are eaten with spoons. Knives and forks are rarely used but available in hotels and restaurants. In the meal, drinks are not served, and that is the reason why soup is another indispensable component of a typical Burmese meal.

Indeed, in any country, travelling cannot be enjoyable without experiencing local foods – especially in Myanmar. To make the most out the unique cuisine there, spend a lot of time eating out at street stalls which sell nearly all kind of dishes from sugar cane juice to Indian style roti breads. They can be seen at every corner of the country, and skilled street vendors never fail to create tasty, hot and fresh street foods. There are even outdoor cafes for you to try out, bringing a whole new distinctive experience.