Located in South East Asia, Myanmar is an unspoiled and stunningly beautiful country. Regarding architecture, the domination is given to the numerous number of Buddhist pilgrimage sites, well presenting aspects of Burmese culture. As Myanmar is filled with constructions of Buddhist pagodas, temples and monasteries, it is given the name "the Land of Pagodas". 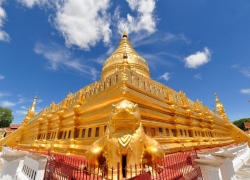 In Burmese language, the word ‘pagoda’ can be expressed in many ways: stupa, paya, or zedi. The most commonly used is “paya”, or “hpaya” – the synonymous expression of “Buddha”; “zedi” derives from Pali language; and “stupa” refers to pagoda enshrined Buddhist relics such as Buddha’s hair or teeth. Myanmar is among the South East Asian countries where stupas are in semi hemispherical designs topped with sharp peaks, representing Buddhists’ alms bowls and their sticks. On the other hand, monasteries are referred to as “hpongyi kyaung”. In addition, monasteries and pagodas are the meditation places for Buddhist monks, known as “hpongyi” in Burmese language.

In Myanmar, most pagodas are gold-gilded and bejeweled, creating spectacular constructions. The four most important Buddhist related sites of the country are Yangon’s Shwedagon Pagoda, Mandalay’s Mahamuni Buddha Temple, Mon State’s Kyaikhtiyo Paya, and Bagan’s thousands of temples and stupas. In addition, the oldest pagoda in Myanmar is 2500-year-old Sule Zedi, located in Yangon.

Apart from Buddhist sites, as Myanmar used to be under the government of British colonization, some parts of the country are graced with marvelous colonial buildings from this time period. Typical examples are Ministers’ Building, an impressive edifice aided with monumental wings, and The Strand, a Victorian style hotel built in 1901 – both of those are located in Yangon.