Visiting Myanmar - one of the typical Buddhist countries, you will have a unique look at Burmese people and culture. It is really easy to realize, starting by their costumes and their hair style. An extraordinary thing is that traditional dresses are used not only in special occasions such as festivals and New Year days but also in every day. 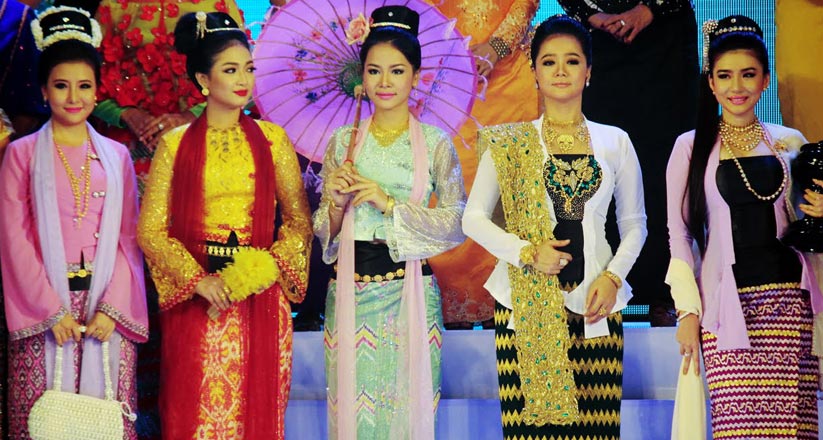 Burmese traditional costumes have a rich history, marked at first by silk and cotton dresses of women clothes in Pyu era around 1000 AD, and now by Paso for men and Longyi for women. 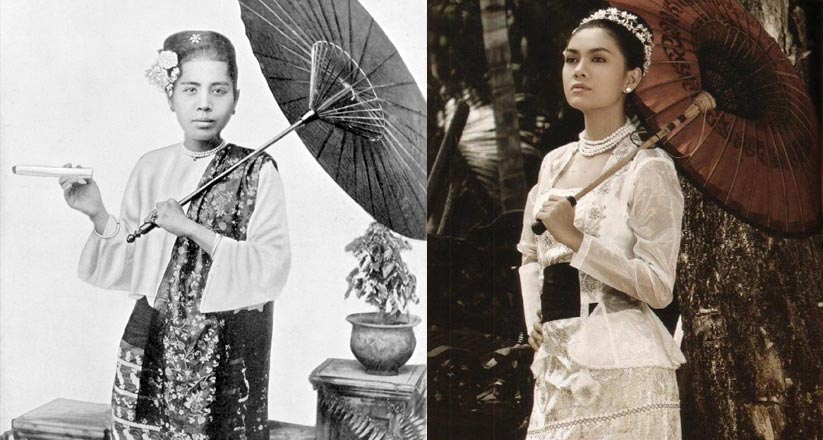 Burmese costumes change in different period: during the Bagan period, Burmese wore embroidered shawls over the shoulders and had bands around arms as popularity; during the Yadanar Bon period, the traditional dresses are Htai Ma Thein Jacket and emerald shawls, wrapped over the shoulders or worn in Queen’s style. People have found a lot of clay women at Bago, and it is said to be the images of women in Hantharwaddy period with their singular clothes. The images of Inwa period people’s costumes found in the murals at Hpo U Hill in Inwa and Triloka Guru Cave in Sagaing, besides some murals in Ananda Brick Monastery in Bagan describing Burmese costume in Early Konbaung period also give an overview of diversity of Myanmar culture. There is usually a scarf or a shawl over the shoulder besides a main skirt covering most of their body.  As Myanmar is a Buddhist country that approximately 85% population is Buddhist, Buddhists’ costumes are one of the traditional and popular dresses. 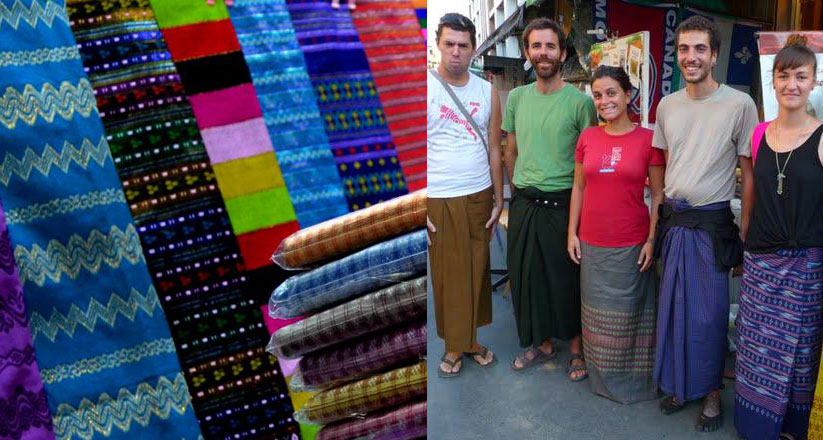 Today, come to Myanmar in common vacation, you only see the Paso and Longyi. Paso is a piece of smooth cloth or striped fabric for men, and Longyi is a flowered material for women, basically about 2 meters in length and 80 cm in width. The cloth is often sewn into a cylindrical shape and worn around the waist, running to the feet, held in place by folding fabric over without a knot. Sometimes, it is also folded up to the knee for comfort. In fact, Paso and Longyi do not have much significant deference in form, but they are not unisex attire. The way people wear as well as the patterns and makeup distinguish Paso and Longyi. Men wear Paso by making a fold on either side in front and tucking them together at the waist just below the navel. Women, on the other hand, always have a 3 cubit 1 finger span length but again unsewn in the old days like men’s. They are worn wrapped around with a single broad fold in front and the end tucked in on one side or the other at the waist. More interestingly, Paso and Longyi can be used as a rain coat or wrapped in form of a solid cap for women to carry goods on their head without a hand-holding. In some areas, women even use Longyi to carry their children when going to work as a hammock.  Traditional Longyi and Paso do not allow wearers to move in a long footstep, but the wrapping way can be changed to run comfortably.

Traditional dresses are flexible in price, suitable for everyone. If you come to Myanmar, it is easy to buy some Longyi and Paso in market, or take an experience like other foreign volunteers: wearing Longyi and sweeping the floor at some majestic Pagoda such as Shwedagon Paya. 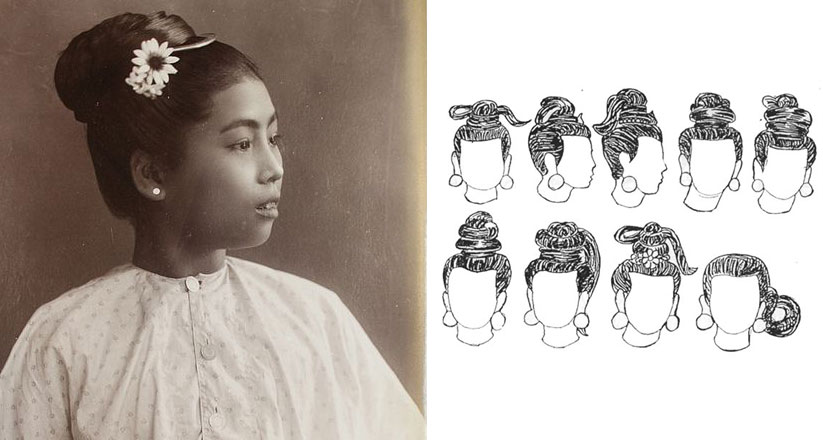 Besides costume, Myanmar culture is also unique thanks to Burmese hair styles. According to ancient records, Burmese women have had own their hair style early since ancient era, and some of them are still in fashion. Start with knot hair style of Bagan period, described as a decorative band worn on the forehead and rings worn on the ears are more popular than others. In Rakhine era, according to sandstone relief at Kokkanthein Pagoda, there are many hair styles – still, they have a thing in common: there is a bun on top. Some rings and scarves are usually used to decorate, making it become more diverse. Today, hair styles are flexible and depend on personal favorite. Thousands of hairstyles are offered, and each people choose the most suitable one for them, as long as it suits with their preference and convenience.